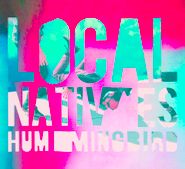 My favorite album of the year, so far. They remind me a little of Grizzly Bear, but some people compare them to Coldplay, which I don’t really agree with. Definitely more indie than mainstream. The drummer is awesome, too.

The second album by Local Natives is such a lush expansion of their sound, it could as well be the work by another band. This is not to say they’ve ignored their strengths — the active percussion work is still there, on the drums of “Heavy Feet,” which rumble like old train tracks — but they’ve pulled back a bit energy-wise, allowing for a more mature and world-weary sound, especially lyrically and vocally, and they’ve filled out some of the empty space with keyboard warmth and renewed dedication to gorgeous vocal harmony. Opener “You & I” follows in Fleet Foxes’ recent tradition of glowing openers, the kind of music you want to wake up to. The time the band has taken to put Hummingbird together is apparent, in the way “Black Spot” unfolds unhurriedly or how “Breakers’” alternating surge and respite gives a sense of its oceanic setting without putting too fine a point on it. For fans who are willing to grow up with them, or for those just coming into the fold, Local Natives’ Hummingbird is simply stunning.