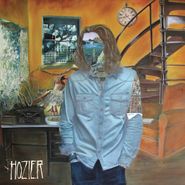 "Take Me To Church" took a small, folky singer-songwriter, Hozier, to super-stardom overnight. Initially a viral YouTube hit, it morphed into a number one radio single. Taking a heavy moral stance, Hozier plows the mic with his frustration at the Catholic Church's stance on homosexuality. His voice wails in cathartic pain and sends shocks into your body. Needless to say, it was expected that his first album would be a self-immolating effigy of 21st century despair. Each track is about the complication of modern relationships and the beauty and horror of love. In Hozier's world, women and men are both tragic by simple virtue of being human. Songs sing of the pleasures of sex and the sadness of death, but understand that ultimately beauty triumphs. Filtered through garage heavy, thick blues lines and a tremendous chorus that crescendos and reverberates into wild fire, Hozier's first album prooves that he's more than a top single, but a multi-layered complex artist.