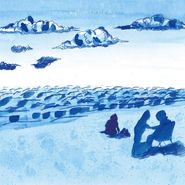 Almost twenty years ago, Texas post-rock group Explosions In The Sky recorded their first album, burning only 300 CD-R copies of it. It's hard to imagine these days but the Austin instrumental quintet's debut record had such little exposure and circulation that it became the stuff of legend. Now this obscure gem has been remastered and given the deluxe vinyl treatment, featuring a heavyweight triple gatefold jacket, a vinyl etching of the album's history and full color insert.