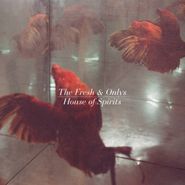 The Fresh & Onlys continue to move away from the reverb-drenched garage rock of their early records and toward something more grandiose on House of Spirits. From the outset, it’s clear they mean business, with more precise songwriting and cleaner production than ever before. Tim Cohen’s lyrics take a darker turn—he sings like Rosemary’s Baby grown up on the rollicking “Who Let the Devil,” claiming Satan bottle fed him with blood, fitting in nicely with co-singer/songwriter Wymond Miles’ typically gothier songs, such as the country-Cure style “Animal of One.” The band turns in one of their loveliest songs ever with “Bells of Paonia,” a throbbing, fuzzed out shoegaze ballad with a dreamy romanticism that suits the band nicely. Mostly, these updates work for the band. Occasionally you miss the early rock stuff, though they go balls out on “Hummingbird,” and the lack of reverb reveals some weakness to the vocals. Still, we’ll take earnest and scrappy any day over easy or lazy, as the band leaps past the tired garage-rock moniker that has previously tailed the band and lands in exciting new territory. Simply put, House of Spirits is divine.