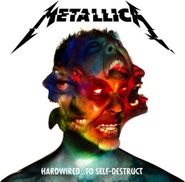 Though Metallica might have influenced generations of punk, grunge, thrash, and metal bands, they're surprisingly unprolific. And so each new Metallica release isn't just hotly anticipated, but comes like a cataclysmic event of shrieking guitars, banging bass drums, furious rhythms, and guttural yelps. Their first album in eight years, Hardwired...To Self- Destruct is a return to form. And not a return of form to Load or St. Anger. It's a return to the form of Kill 'Em All and Master of Puppets. The slow, brooding, and portentous style of their late-career is mixed in with classic, clean, clear, and furious thrash that's so intense and technical, it will get your adrenaline pumping. Metallica themselves are treating it like a behemoth of an album, with special concerts, promos, and a music video for EACH song on the album.

"Hardwired" opens with a precision sharp riff that explodes with sweat and fury. The bitter, ironic track feels apt for these chaotic times as James Hetfield unleashes into the microphone in a cathartic rant. The fury of the track feels closer in spirit to "Whiplash" than to anything they've done on their last few albums. "Moth Into Flames" is far closer to the post-'80s Metallica of long, steady ballads that build and build on short, technical riffs until the song kicks it into 100mph. When the guitar solo comes in a minute and a half into the song, it almost dissolves into a modern skate punk track before going back to classic Metallica intensity. It also shows off Lars Ulrich's endless energy and showcases some of his most powerful drumming on the album. Being a Metallica fan can be a real trial sometimes when they take unexpected directions while simultaneously trying to please fans, but Hardwired is probably the closest they've gotten to something that should appease the die-hards, the casual listeners, and even those new to metal. The most brutally intense album of 2016.