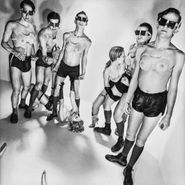 Devo fans are in for a treat with Hardcore Vol. 1 and 2, which collects rare early recordings from the legendary new wave band. It’s amazing to hear well-loved Devo songs like “Jocko Homo” in their earliest stage, slowed down and sparer, with Mark Mothersbaugh’s voice deeper and more detached than on its later incarnation. You get to hear their concept forming, moving from its genesis as abrasive “devolved blues” informed by the sensibilities of German bands like Kraftwerk to its more upbeat and goofier later form. It’s sometimes jarring to hear Devo take themselves more seriously in these mid-’70s recordings, but listen closely and you’ll hear their offbeat sense of humor poke through on songs like the sci-fi-flavored “Fraulein.” And while songs like “Auto Modown” and “Be Stiff” aren’t catchy per se, they definitely add to the Devo canon by presenting Devo as a scarier, more robotic version of their later selves, more clearly exposing the social criticism at the core of Devo’s art-pop. No Devo fan should be without this essential look into the birth of one of the most distinctive bands of the past several decades.