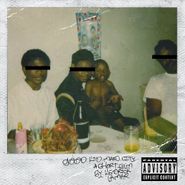 Good Kid M.A.A.D. City is the sound of extraordinary promise achieved, as Kendrick Lamar, who rapped as an independent artist for years, releasing his acclaimed Section.80 mixtape last year and working with the likes of Drake and Dr. Dre, before releasing this, his major-label debut. Given that pressure, the most remarkable thing about Good Kid M.A.A.D. City is how relaxed and assured it sounds. Its first two tracks set the stage introducing Lamar as a kid from Compton as devoted to religion as he is to girls — “I am a sinner who’s probably gonna sin again,” he says on “Bitch, Don’t Kill My Vibe.” That’s before tearing into “Backseat Freestyle,” a blistering, Lil’ Wayne-style track with production from Hit-Boy, known for his work on such tracks as Jay-Z and Kanye West’s “Ni**as in Paris.” From there, Good Kid M.A.A.D. City continues developing its addictive world of sound, moving into the affecting, detailed account of troubled youth, “The Art of Peer Pressure,” rapping over a Janet Jackson sample with Drake on “Poetic Justice” and taking a dip into the narcotic haze of “Swimming Pools,” evoking the weary, head-spinning world of partying night after night. Lamar even makes his seemingly heavy-handed 12-minute “Sing About Me, I’m Dying of Thirst” work, given its starting casualness — the gunshots that cut him off from finishing his “if I die before your album drop” line are so matter-of-fact and quick, they ring louder and truer than a hundred other hip-hop tracks utilizing the overused gun shot effect. Good Kid M.A.A.D. City is as intricate, strange and thoroughly addictive an album as anyone could have hoped to hear from Kendrick Lamar.