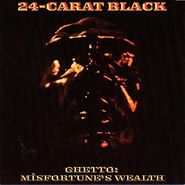 History might have completely forgotten a short-lived soul ensemble from Cincinnati called the 24-Carat Black, who released their lone album Ghetto: Misfortune’s Wealth in 1973, if not for this little thing called hip-hop. At some point in the nineties this album turned into breakbeats 101, being sampled by quite literally everyone, most recently and notably by Kendrick Lamar on 2017’s world conquering DAMN. In fact, look at any random list of the top 10 MCs of all time. Assuredly, more than half of them rapped over these grooves at some point (especially if they’re from NY). Not a bad legacy for a band that had a grand total of EIGHT songs in their discography. The music itself is no slouch either, featuring a teenage group of capable funk acolytes called The Ditalians molded into a streetwise, socially conscious collective by a Stax records conductor named Dale Warren. This is early seventies funk of the Sly Stone-vein venturing into prog rock/concept album territory: full of rich orchestration, long elastic grooves, and plenty of jazz poetry-inspired musings on inner city life and the black experience. With the songs averaging seven minutes long and without a single to speak of, it wasn’t the most commercially successful album of its era, to say the least. However, its genius has been preserved by hip-hop culture and Craft Records, who have lovingly reissued Ghetto onto 180-gram vinyl. Now here’s a question: can an album be considered truly “lost” if, without realizing it, most people have already heard it? Consider it merely great, then. It certainly lives up to that definition.