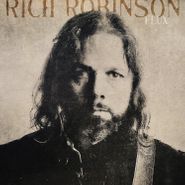 The blues rock attitude of the sixties stays perfectly alive with Black Crowes' Rich Robinson. Head-throttling guitars slam your head with emotional solos that are powered up and amplified to shock. With his back catalog recently reissued, Robinson approached Flux differently than his prior efforts. Whereas he previously wrote tracks at home and then beefed them up in the studio with his large backing band, Flux was a bit more improvisational. Fragments of songs were taken into the studio and worked out with his band until they popped just right. You can hear the excitement in the way the loose, almost ramshackle way all the elements come together, just like Bob Dylan's mid-'60s period. There are more risks and strange choices done than in any of his other solo albums or with The Black Crowes that it creates the atmosphere of pure musical joy. "Sleepwalker," his Eagles-ish ballad, is about independent thought and dealing with human emotions. While society stigmatizes open thought and emotion, Robinson's blunt lyrics and spiritual guitar embody pure feeling so beautifully that it is painfully real and raw. "Which Way Your Wind Blows" channels the aggressive English-blues sound of Bad Company with a bass line that weighs a ton and a guitar solo distorted so it sounds almost like a synth. Robinson's scathing lyrics taunt and mock in such a weirdly, sloppy way that it reminds you of the missing attitude from modern rock. Crack open a beer and blast this one. Its hypnotic blues-rock blend will take you back to 1975.