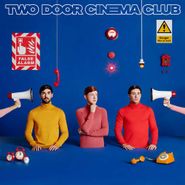 UK indie trio Two Door Cinema Club release their 4th studio album False Alarms, which might be the catchiest group of songs that the band has put out since their lauded debut. The ‘club update their hybrid of Phoenix/Kaiser Chiefs/Franz Ferdinand-styled “Is it dance? Is it pop?” music by fully embracing the movement end of that equation. With a synthesizer-heavy, very of-the-pop-milieu production, False Alarm suggests a close studying of nervy '80s New Wavers such as Tom Tom Club or Talking Heads. Featuring syncopated percussion, angular synth lines, and an irrepressibly funky bassline, lead single “Talk” particularly seems to be a statement of purpose: jittery introverts making extroverted dance cuts.