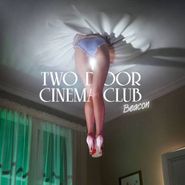 Two Door Cinema Club are back with that all-important sophomore album — the one after a breakthrough debut album that can threaten to make or break the rest of a young band’s career. Good for Two Door Cinema Club; they knocked it out of the park with Beacon. It builds on the success of Tourist History but is harder, faster and bigger, with the same catchy swagger they previously employed. More of an emphasis on electronics, such as the arpeggiated synths that open the album, on the morose dance track “Next Year,” are the biggest update here. Thankfully, they don’t sacrifice songcraft for volume though, as “Next Year” sneaks up and knocks you flat with a minor key chorus out of nowhere. “Handshake” could be the band’s breakthrough dance-rock single a la M83’s “Midnight City,” sounding au currant with big beats and synths, R&B basslines and sparkling guitarwork. “Wake Up” works a nuanced groove into another big chorus, while the band’s dreamy first single, “Sleep Alone,” is sexy enough to ensure the band rarely will be. A definite highlight is “The World is Watching (With Valentina),” featuring up-and-comer Valentina crooning a romantic hook that lands the song in classic dancefloor territory. Beacon is no dull follow-up; it shines brightly toward Two Door Cinema Club’s future as one of the next big things.