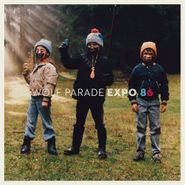 Spencer Krug seems to have twice as many ideas brewing inside of him than he’s able to get out, and he writes songs jam-packed with melodies, counter-melodies, zigzag structures, and twisting rhythms piled atop one another. So 2010 is a banner year for Krug fans, as you got not one, but two excellent releases from him. The first was the Dreamland EP, subtitled “Marimba and Shit-Drums,” which consists of a single 20-minute track played entirely on the marimba. While it could result in something pretentious or masturbatory, Krug took the time to really explore the instrument and delivers a thoughtful blast of dreamy pop. And when those shit-drums kick in, man, it’s awesome. Wolf Parade, Krug’s main group, opens their new album with frantic drumming and Krug’s otherworldly warbling voice. What follows is raucous, twisting art-rock that shows off both his and co-frontman Dan Boekner’s songwriting prowess. There’s a strong hunch that one of the song titles is a Metalocalypse reference. (Cody MacKenzie)