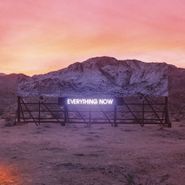 Arcade Fire’s Everything Now is bold, ambitious, and electric. The album takes its name from the opening track, a hybrid disco song co-produced by Daft Punk’s Thomas Bangalter, setting the stage with its sweeping soundscapes and genre-hopping grooves. The rest of the album is equally surprising; this is Arcade Fire doing their thing, but they’re embarking on a fascinating sonic experiment, dipping into punk, electro, reggae, and indie to create something new and different. The result is a forward-thinking album that pushes their sound forward and thumbs its nose at the boundaries of indie rock.