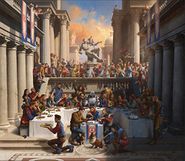 Gaithersburg, Maryland-based rapper Logic grows more ambitious with each release. Following his last record, a concept album and apparent screenplay set 100 years in the future, is 2017’s Everybody, which brings the artist back down to Earth on a record that delves deeper into the personal. Over the course of 71 minutes, Logic fastens an album revolving around a character named Atom who dies, meets God (voiced by Neil deGrasse Tyson!), and subsequently is reincarnated into every possible human perspective, whose stories are detailed in these 13 songs. It’s a tall order to fill, but the album lives up to its weighty premise. Most poignant are the observations drawn from Logic’s particular experiences, addressing his biracial background and upbringing; his unique perspective of life from two very different sides. “Black SpiderMan” is the glorious culmination of it all, with an inclusive, life-affirming message and joyous sound buoyed by a full choir and orchestra. Sonically and lyrically, its closest contemporaries are Kendrick Lamar and Chance the Rapper, artists who in recent years have delivered similar messages of positivity mixed with stark honestly, all over jazz and gospel influenced productions. Call it socially conscious hip-hop if you want, or science fiction if you must, Logic defies category here on an unapologetically earnest album truly made for everybody.