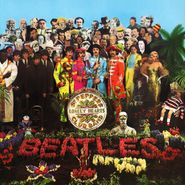 For those who loved the brand new stereo mix that accompanied the 50th anniversary reissue of Sgt. Pepper’s Lonely Hearts Club Band, it has been released as a standalone LP, minus any alternate takes or other frills, and presented the way the original record was meant to be. Remastered by Giles Martin (son of George Martin) and Sam Okell, sourced from the original four-track session tapes, and sonically guided by the original mono mix, this is the definitive way to hear the definitive pop record of the 20th century.