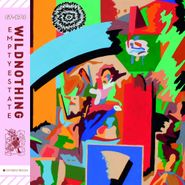 Wild Nothing aka Jack Tatum's two album are terrific pieces of electronic-tinged new romantic pop, but he's just as good at the short-form, as his Golden Haze EP and Go-Betweens-vibing "Nowhere" single proved. It seems to a place for Tatum to try out new ideas separate from his honed full albums, and the Empty Estate EP is another fine departure for Tatum. Using different instruments and textures than before, the EP finds Tatum venturing further into new territory. While opener "The Body in Rainfall" is buzzy, '90s-style power pop, the next song is the stuttering, funky "Ocean Repeating (Big-eyed Girl)." "On Guyot," meanwhile, is a nostalgic sound piece that replaces vocals with dreamy, arpeggiating synthesizers. But to say the release is wildy varied shouldn't imply it's scattershot. By the time we reach the intoxicating centerpiece "A Dancing Shell," which sees Tatum singing an spoken-word tone over a deep electro groove, it's clear Tatum is more concerned here with quality than continuity. Even with its stylistic shifts, Empty Estate is as thoroughly brilliant and pleasurable as anything Tatum has released thus far, and it speaks highly of what's to come.