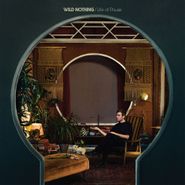 Wild Nothing’s third album is a glorious thing. It’s an album that transcends any genre tags like dream pop or indie pop that dogged Jack Tatum’s work in the past — it’s simply a first-class pop album in the vein of Roxy Music’s sophisticated artpop classic, Avalon. Life of Pause is Tatum’s most varied release thus far. “Reichpop” opens regally with a wall of vibraphones, slick new wave beat and Tatum’s cool breath of a vocal. “A Woman’s Wisdom’s” ethereal soul moves into sugary, MBV-inspired shoegazer “Japanese Alice” and through the lush, synth-heavy title track, the languidly sexy “Alien” and “To Know You’s” motorik beat and cinematic guitar shimmer. Neil Young-inspired folk songcraft inform “Adore,” and things return to slinky grooves for “TV Queen” and “Wherever I,” touches of sax and strings adding an air of cheek and class. In the past, you could have pinned Tatum down as someone who admirably filtered influences like C86-style college rock and dream-pop but ultimately wore them on his sleeve. Life of Pause sheds any such limitations and is easily one of the best indie rock releases of the early new year.