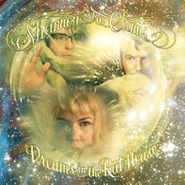 Remember that moment in Female Trouble when Divine storms out of the room because her parents didn’t give her the cha-cha heels she wanted for Christmas? Or that part in Hairspray when the kids decide to turn their noses up at the squares and dig their dancing feet into the concrete? This record is kind of like that, but better.

Oakland’s Shannon & The Clams throw rockabilly in the garbage disposal and pull it back out for the wonderfully jagged lo-fi rock ’n’ roll of Dreams in the Rat House. Shannon Shaw’s vocals go from sultry to snarl in a heartbeat on “Rip Van Winkle,” with great ghostly backup vocals making the whole thing feel like the soundtrack to a lost “Twilight Zone” episode. The band employs ’50s and early ’60s rock signifiers like the  doo-waa-doo’s and arpeggiated guitars on “Ozma” for some pleasingly perverse throwback pop moments. But the band is often at its best when they let themselves get as nasty as they wanna be, like on the rumbling, growling “Bed Rock” or the 13th Floor Elevators-style, doom-laden stomp of “Rat Houe.” Some are content to spike the punch, while Shannon & The Clams go straight for the whiskey on the excellently depraved Dreams in the Rat House.