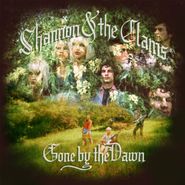 Shannon & the Clams delight in taking the squeaky clean pop of yesteryear, rubbing its face in the mud and then pretending to play it straight. Their fourth album begins with a retro sci-fi exercise in B-52’s-esque atmosphere, complete with theramin, on “I Will Miss That Jasmine.” From there Shannon Shaw takes on several guises, stepping into the role of R&B combo singer, grittily crooning through the bluesy “My Man,” then immediately softening for the girl-group bounce of “Point of Being Right” and sweet doo-wop of “Baby Blue.” Though Gone By the Dawn is more ballad-heavy than previous works, its songs inspired in part by the end of a long-term relationship, that’s given the album more heft, with Shaw displaying new deep shades to her voice in songs like the heartrending “Corvette.” Shaw has never sounded better as in “It’s Too Late,” in which Shaw’s voice is pushed to the forefront, grittily crying through lines like “I remember your body/And I start to die.” Gone By the Dawn is a breakup album dressed in thrift store ephemera, kitschy enough to keep it fun but ultimately backed by real emotion, making it their strongest album yet.