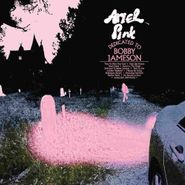 Ariel Pink has been recording music since the late '90s, finding cult success when his early, lo-fi homemade albums were issued on Animal Collective’s burgeoning Paw Tracks label. These early releases presented a warped sonic palette that became Ariel’s trademark, including beat-boxed drum sounds, primitive synths galore, and an undeniable pop genius that incorporated the chintziest aspects of '60s, '70s, and '80s throwaway music into a unique sound unlike any other. In 2010, he released his breakout record, Before Today, which featured an upgrade to a full band and proper recording budget, and subsequently became a critical darling as well as polarizing persona in the greater indie world. These past seven years have found Ariel having achieved some of the fame and validation he thought he always wanted, and he dedicates his latest record in title to someone who spent most of his life chasing after the same thing. Bobby Jameson was a little known '60s folky singer-songwriter dubbed “Mayor of the Sunset Strip” for his perpetual participation in the curfew riots, who briefly brushed with fame before falling victim to bad management, drug addiction, and homelessness.

Dedicated to Bobby Jameson is, in many ways, a throwback to Ariel’s earlier days: it's his first album to be largely self-recorded since the 2000s and carries with it many of the musical idiosyncrasies that had been (only somewhat) polished over on his past three records for 4AD. The title track, in particular, is classic Pink, featuring an overload of synth-strings and crammed with pop hooks that sound like they’ve been left out in the sun too long. Along with the dark bedroom funk of “Death Patrol,”it could easily fit onto early masterpieces such as House Arrest or The Doldrums. Elsewhere, “Feels Like Heaven” pays homage to Ariel’s self-professed favorite band The Cure, with a winking title and stargazing chorus. Other tributes come in the way of “Bubblegum Dreams,” which quotes the Vaselines on a song as buoyant and catchy as its name would suggest, or the ambient goth trash of “Time To Live,” which gloriously steals the melody from “Video Killed The Radio Song” on a song about living…or dying. It’s all the same, dude. “Santa’s In The Closet” affects a vocal style that lands somewhere between Paul Roland and Rozz Williams over lyrics that are more literal than you might think. At the album’s finale, Ariel tackles two of the few genres that have mostly eluded his omnivorous tendencies: folk-pop and quiet storm on “Do Yourself A Favor” and “Acting,” respectively, the latter featuring a collaboration with fellow Angeleno music wizard Dam Funk. These brilliant songs all loosely fit behind the legacy of a man who constantly sought the recognition he deserved, delivered from the vantage of another who reached it and thought “now what?” Dedicated to Bobby Jameson is the correct answer.