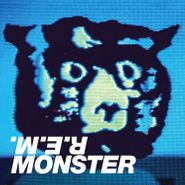 R.E.M.'s acclaimed ninth album Monster has been newly remastered and reissued for its 25th anniversary! This expanded 2LP version includes a bonus disc with a special 2019 remix from Monster producer Scott Litt.

When Monster was originally released, the band was at a crossroads in their career. It had been six years since R.E.M. had toured and their previous two albums were full of ballads, acoustic rock songs, and intricate arrangements. They were also grappling with the celebrity that came from being one of the biggest, most recognizable bands in the world. The result was Monster, an album unlike anything they had released before. Journalist Matthew Perpetua writes in the liner notes that R.E.M. “never been this distorted and dirty, or this glam or this flirty.”