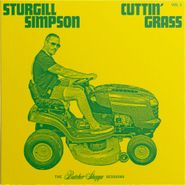 Sturgill Simpson's Cuttin' Grass Vol. 1 is an album of over 20 previously recorded tracks from this wild card country artist rearranged as bluegrass numbers. Performed with artists like Sierra Hull, Stuart Duncan, and Tim O’Brien, these tracks from Metamodern Sounds in Country, A Sailor's Guide to Earth and more thrive in their new setting with exquisite, intricate picking, lively fiddle and lush backing vocals. The already lovely "Breakers Roar" is sped-up here without losing its sense of melancholy, and lifted into euphoric folk. "I Don't Mind," a straightforward country-rock number from Simpson's previous band Sunday Valley, is softer and sweeter here with its sorrowful fiddle, but there are plenty of danceable tracks like "Life Ain't Fair and the World is Mean." For fans of Simpson's ever-fluctuating sound as well as lovers of folk and bluegrass.