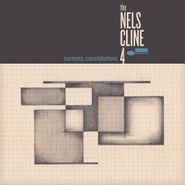 Nels Cline has had the type of fascinating and diverse career that most musicians could only dream of. Though he's mostly recognized as the lead guitarist of Wilco for nearly fifteen years, his roots lie in free jazz (like his brother, Alex Cline), free improvisation, and even noise. But since the release of his Blue Note album, Lovers, back in 2016, he's gotten less avant garde, and instead explores the limits of the hard bop era of sound heralded by musicians like Grant Green. With his new band, The Nels Cline 4, he continues new musical directions with their first album, Currents Constellations. While Lovers had plenty of sweet melodies and romantic themes with delicate orchestrations, Currents explores the type of transition that hard bop began with Eric Dolphy's Out To Lunch, where traditional jazz rhythms got stranger and more experimental. The album is far from the obtuse sounds of the late Cecil Taylor or Ornette Coleman, as Cline's melodies are deconstructed around catchy motifs. A quick listen to the innocuous sounding "Swing Ghost '59" gives you an impression of where the album is headed. Starting off with a catchy rhythm, the song goes off the rails ten seconds in with some dissonant guitar jamming and precise, methodical improvisation that adds wilder dimensions to the song. But before the weight of the improv flattens you out, the swing interlude kicks in, showing the versatility and care Nels Cline takes with his guitar work. "Imperfect 10" has the group build on monotonous, short riffs that last a few bars and repeat in quick succession. But the band uses these moments to stretch out and have fun over these quick parts. As an example of the band's supreme talent, this track gives each member a part or solo that allows them to explore the song, while Cline keeps it lean. Currents Constellations tells you there's still plenty of life in jazz, as long as you are okay with breaking away from tradition.