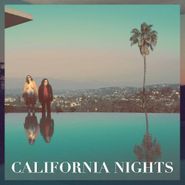 Best Coast has always perfectly captured the West Coast vibe, and California Nights is no exception. With heavy guitar fuzz and soaring melodies, Bethany Cosentino and Bobb Bruno have made a record that feels like summer all year round.

Best Coast have found the perfect balance between their scrappy roots and pop ambitions on their third album. After a crackling first album that perfectly captured early-’20s angst with confessional lyrics and simple, lo-fi arrangements, album No. 2 aimed for maturity and a cleaned-up sound, with mixed results. Their great Fade Away EP seemed to backpedal a bit, and now California Nights is just right, kicking out distortion-laden odes to getting older and trying to get it together. “Feeling Ok” sees Bethany Cosentino pulling herself up after hard times and saying things are OK for now, while her cohort Bobb Bruno supplies alternately jangling and crushing riffs. Cosentino’s lyrics fall somewhere between melancholia and acceptance this time around, telling herself (and, presumably, her leagues of followers) to stop chasing some boy around and be fine on your own on the KROQ-nostalgic “Fine Without You.” While much of California Nights has ’90s rock radio on its mind, the title track and “Heaven Sent” digs into British shoegaze bands like Lush and ’80s Paisley Underground bands like early Bangles. The album sounds bigger and fuller than anything they’ve done, but Cosentino thankfully hasn’t lost the ability to write straightforward, relatable lyrics that offer a slice of her life, exposing the loneliness behind something as mundane as picking up your phone and seeing zero texts, or sitting in silence next to your boyfriend while watching TV, on the superb, Weezer-esque “In My Eyes.” Cosentino is at her best when she’s down to Earth, rather than aiming for profundity outright (“What is life? What is love?” on the bubblegum of “So Unaware”). California Nights has enough of those times to even out the more anthemic moments, while the melodies have never been catchier, making California Nights a thoroughly entertaining listen.