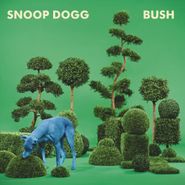 Not since 2008’s Ego Trippin have we seen such a solid record from Snoop. Bush, the collaboration between Snoop Dogg and Pharrell Williams, embraces the one element that made the west coast hip hop sound stand out. Funk. That P-Funk inspired sound is back in full force on Snoop’s 13th studio record. Opening with the typically stoney smooth “California Roll,” the first track immediately lets you know who you’re messing with. Once you hear the undeniable harmonica of the one and only Stevie Wonder you know these two are pulling out all the stops. And most of the record keeps the funk flowing. “So Many Pros” cites influences from Maze to Clinton and “Peaches N Cream” features Charlie Wilson from the Gap Band. But the record isn’t all nostalgia. Snoop eases a laidback verse here and there in between the singing on the record. Aided by the likes of T.I. on “Edibles” and Kendrick Lamar and Rick Ross on the closer “I’m Ya Dogg,” Bush has just the right amount of rhymes to match the funk.