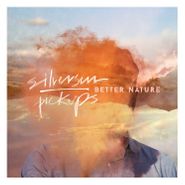 L.A.’s Silversun Pickups dye their hair black, put on tailored suits and go full new-wave on their latest album. The new guise fits them perfectly. With some bands, changing gears like this might merely be viewed as a bid for the mainstream; with Silversun Pickups, it’s a marked improvement in their sound. From opening track “Cradle (Better Nature),” the band debuts a more electronically charged sound, sounding like a more rock-oriented New Order. They’ve undergone this change with hooks intact, as the pulsating beats and catchy synth riff of “Connection” can attest. Better Nature is the band’s most varied release, moving from moody shoegazers (“Pins and Needles”) to synthy ballads (“Friendly Fires”) to the kind of anthemic rock ‘n’ roll upon which they’ve built their name (“Nightlight”), albeit with more of an M83-ish digital throb. Our favorite might be “Circadian Rhythm (Last Dance),” a Cars-influenced, new-wave night-driving jam that’s one of the band’s catchiest songs yet. Rarely can a band switch gears without likely pissing off their fans, but it looks like Silversun Pickups have done so, as Better Nature could be the band’s best yet.