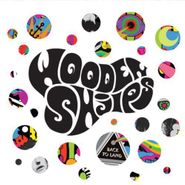 Wooden Shjips have always been one of the coolest psych-rock bands on the block, one that gives a good name to the concept of jam bands. But their latest, the aptly named Back to Land, reins in some of the jams in favor of more concrete songs. It’s a bold move, as the band has relocated to Portland from SF and seems to have re-energized the band, but it’s a move that likely won’t upset their fans. Songs like the great title track still are allowed to drift past the five-minute mark, utilizing simple, repeated chord structures built on fuzz guitar and organ drone, encircling the proceedings with tasteful improvisation, while frontman Ripley Johnsaon’s Alan Vega-esque drawl fades in and out, directing things like a super chill camp counselor. While the songs lengths may be shorter, there’s no shortage of variety on Back to Land, making room for fuzzy Velvets-style ballads like “These Shadows” and the kind of driving, power-chord romp they do so well on songs like “Other Stars.” Wooden Shjips may pick up a few more seafairers with the friendlier Back to Land, but there’s plenty to like for longtime fans as well. Dock up and listen.