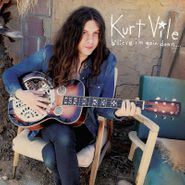 The crown prince of stonery folk-rock and onetime War on Drug returns after breakthrough album Wakin On a Pretty Daze. Big-time production hasn’t dulled Vile’s touch one bit; it’s merely given his stellar songs their appropriate due, as he moves from chatty rockers like “Pretty Pimpin” to Western-tinged tunes like “I’m an Outlaw” and his bread and butter — cerebral, spacey folk songs like “That’s Life, tho (almost hate to say).”