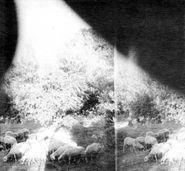 Godspeed You! Black Emperor’s last album, 'Allelujah! Don't Bend! Ascend!, was such an achievement of monolithic post-rock sound that it’s hard to believe it’s only two-and-a-half years later and they’ve done it again. ?Asunder, Sweet and Other Distress?' is based on the singular piece “Behemoth,” which the band has performed live many times, and as such it’s one of the band’s shorter albums at a manageable 40 minutes stretched over four tracks. “Peasantry, or ‘Light Inside of Light’!” rides on sunbaked guitar swells that call to mind some unmade space-Western. It crests into “Lambs’ Breath,” whose echoing sounds creak among waves of dark distortion. Though Asunder starts more reined in than ’Allellujah’s darker, more aggressive tones, its closing track, “Piss Crowns Are Trebled,” utilizes overdistorted riffs to clash against the strings that return the album to melodic territory and as the drums march forth militaristically, give the album a dramatic finish. Asunder isn’t perfect—the title track feels too much like dead air—but it’s also one of their most digestible sets while still leaving listeners on the edge of their seats as it progresses and evolves from one intricate movement to the next. Like the best of Godspeed’s work, it’s a singular listening experience.