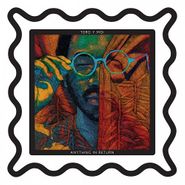 The man behind the music delivers another astounding collection of lovely electronica. Mood-altering instrumentals and happy-go-lucky verses and hooks glide through meadows of insecurities and deserts of over-confidence, providing just the right amount of medication to keep you floating inches off the ground. One of his strongest offerings yet.

It looks like Toro y Moi’s last release, an EP of older material called June 2009, was no detour or dump. Chaz Bundick has returned to creating more dance-oriented material after Underneath the Pine’s more psychedelic feel. Bundick’s honing down of his sound leads him to the layered, early ’90s house feel of Anything in Return’s opening tracks. But his music is anything but simple; how to explain “So Many Details,” a kind of psyched-out hip-hop track with Commodore 64 sound effects and faded out vocals floating over like chem trails? Fans who wanted Bundick to expand on the chillwave sound of his debut with better, more defined beats will thrill to songs like “Rose Quartz,” which pairs its summery flow with warped keyboard lines that keeps everything a little buzzed and wobbly. The most notable change here is Bundick himself, who makes himself more present, more of a personality across Anything in Return, after tending to somewhat hide in the background of his elaborate creations; while some tracks veer on instrumental, on others, such as “Cola” and “Studies,” Bundick steps out of the shadows as a chilled out hip-hop/R&B crooner in the vein of Frank Ocean and How to Dress Well, though his insistence on strange musical diversions and ornate arrangements sets him apart. It’s just that now, Bundick’s twiddling the knobs AND rocking the party.