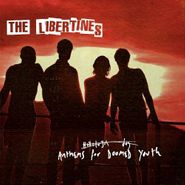 It's been eleven years since their second album and The Libertines are finally back, more sober and more somber. Anthems For Doomed Youth feels more like the name of a biopic for The Libertines themselves. Pete Doherty's very public drug problem doesn't paint The Libertines as a couple of indie rockers just having a good time. After Pete Doherty reunited with bandmate Carl Barat at his rehab clinic in Thailand, they decided they had no other choice but to get together and record again. The eleven years have made them far wiser and more introspective, realizing they were close to being the Smiths of 2015. The melancholic guitars never explode or crash in fury or desperation, but fill the void and tragedy in their hearts with gentle, transcendent exhilaration. Enchanting sadness!