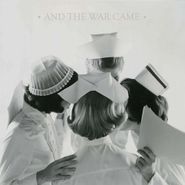 Alejandro Rose-Garcia's second album under the name Shakey Graves is the kind of music that keeps Austin weird and retains its Texan flavor. And the War Came is a blissful late-night drive of FM country ballads buzzing out of the busted stereo of your old car. Surprisingly minimal, Shakey Graves, armed with his guitar, whiskey-pitched vocals and foot-stomping percussion, gives country-rock an edge of millennial hipness lacking from most contemporary acts, but without any of the ironic distance. His sincere approach comes through in the feelings of love and joy he has for the country culture around him. The album's single, a duet with Esmé Patterson called "Dearly Departed," recalls Bob Dylan and Emmylou Harris on the legendary album, Desire. Shakey's voice drenched in whiskey and beer harmonizes in a swirl of Beauty and the Beast against Patterson's sweet, melodious twang. The sparseness of "If Not For You" with just a man and his guitar feels more like Depression Era hobo folk where someone pours out through the soul not for money or recognition, but because they know no way to keep it in. For those who think "country music isn't for me," they should blast some Shakey Graves in their car and see how he's keeping Texas the hub for interesting country.