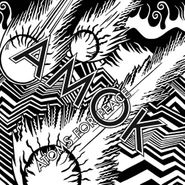 No, the Atoms for Peace debut, Amok, is not the newest Radiohead album. If those are your expectations, you will be disappointed. On the other hand, if your mind is open, you may be pleasantly surprised to find a laid-back groove heavy experiment in star power collaborations.

Thom Yorke further blurs the line between organic and electronic, emotional and mechanical on his latest release, with Atoms for Peace. Keeping the more electronic-based notion of his 2006 solo album, The Eraser, Yorke balloons the tinny sound of that album with living, breathing collaborators — Radiohead producer Nigel Godrich, Red Hot Chili Peppers bassist Flea and session drummer Joey Waronker. “Before Your Very Eyes” wipes the floor with most songs on The Eraser with its fully realized sound and emphasis on Yorke’s robofunk riffs and supernatural, swooping vocals. “Default,” too, is like the gnarled single the last Radiohead album, The King of Limbs, was missing. “Ingenue” boasts some of the catchiest synth riffs on the album, and its backbeat, a sort of digitally created, organically reconstructed afrobeat/dubstep hybrid, demands careful attention. Though Amok is sequenced well, some of its tracks fail to make a lasting impression, but by album’s end, the acoustic guitar spiderwebs, handclaps and layers of heavenly Yorke vocals on “Judge, Jury And Executioner” save the day, along with the trippy jazz beat, mathematical guitar, buzzing synths and gurgling, cut-up vocals of “Reverse Running.” Musically there’s something new to glean from each listen, from allowing the densely sequenced beats to firmly etch themselves in your brain to appreciating Yorke’s croon as it echoes out and drowns in reverb. Those who closely follow Yorke’s forward-looking adventurousness will get more from Amok than those looking for songs with the emotional heft of, say, a “Karma Police” or “Kid A.” However, Amok is a more than striking debut, sending new spores to grow on you with each listen and establishing Atoms for Peace as a welcome project from Yorke and co.