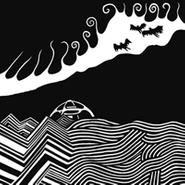 Atoms for Peace, the supergroup formed by Radiohead’s Thom Yorke, longtime Radiohead producter Nigel Godrich, Red Hot Chili Peppers bassist Flea, and percussionists Joey Waronker and Mark Refosco, offers this first taste, a two-song 7” of complex electronic rock that will thrill fans of Radiohead’s later work as well as darker dubstep like Andy Stott and Burial, from which Yorke has drawn some inspiration. “Default” is the friendlier track, starting with a cut up synth and low, dragging bass notes. Yorke coos overhead like a diva, drenched in reverb, while various beat-devices skitter like bugs. “What the Eyeballs Did” maintains a steadier, if still glithcy beat, and gives Flea a chance to unload a bass groove over which the crew spills synth noise while Yorke sings detached in the distance. Both songs are stunning and speak to adventurous new ground the band is sure to cover with its coming LP, due in 2013.