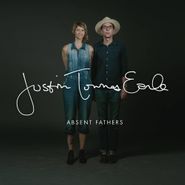 Recorded at the same time as his September 2014 album, Single Mothers, Absent Fathers continues into personal and often heart-wrenching songwriting. But a welcome dose of energy also keeps Absent Fathers from wallowing too deeply. Jaunty guitar playing on “Farther From Me” softens the lyrics about a distancing relationship. His voice cracks like firewood on “Why,” hitting all the right notes as he sings jilted lines like “Why do you always think the worst of me?” Heavenly steel guitar helps make spare tracks like “Least I Got the Blues” soar, while steady beats keep songs like “Call Ya Momma” feeling sprightly, even as that song details a failing relationship. There’s a sense of hope that peeks through these blue tracks, as “Day and Night” somehow feels hopeful amongst even among bitter lines like “once my back was strong, now I’m on my knees, my pockets are filled with broken, worthless things.” Taken together with Single Mothers (which were wisely split up; it could’ve been sadness overload were they made into a double-album), Absent Fathers makes for a strong musical statement that continues to help Earle settle into his rich musical heritage (as the son of Steve Earle and godson of Townes Van Zandt). It’s one of the finest alt-country releases we’ve heard in some time.