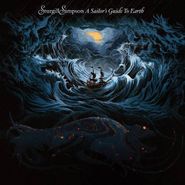 Country rule-breaker Sturgill Simpson creates yet another album that defies genre trappings while still honoring the roots of hard country. On the album’s beautifully orchestrated opening track, “Welcome to Earth (Pollywog),” piano, sighing steel guitars and emotive strings combine while Simpson’s throaty and bare voice delivers genuine romanticisms (“I’ve been told you measure a man by how much he loves”) before moving into an unexpected soul strut — and that’s just the first song. Tracks like the gorgeous “Breakers Roar” follow suit, and Simpson can even turn Nirvana’s “In Bloom” into a country daydream. Meanwhile, tracks like “Keep It Between the Lines” are pretty honky tonkin’, showing Simpson hasn’t abandoned the sound that earned him favorable comparisons to Waylon Jennings, though he’ll still change things up on the more countryish tunes with oddball, naturalistic lyrics and rollicking solos on songs like “Sea Stories.” Though he marches to the beat of his own drummer, that’s precisely why Simpson’s latest is one of the best modern country albums of the year.