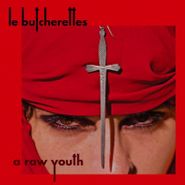 Mexican garage punks Le Bucherettes have a lot to say and an awesomely corrosive way of getting their social commentary across on second album A Raw Youth. With The Mars Volta’s Omar Rodriguez-Lopez at the production helm, drummer Chris Common, bassist Jamie Aaron and frontwoman Teri Gender Bender tear through these 12 songs with the ferocity that comes with speaking up for those whose voices go unheard. “Take a second, open your mind” Bender entreats on the fierce “Shave the Pride,” her glammy, androgynous vocals leading the way through a punky rave-up that feels like a call to arms. Songs like “Reason to Die Young” or the are powerful yet dark, with lyrics like “Who do we think we’ve become? No sign of life in this hell hole,” while the Berlin-esque “Sold Less Than Gold” deals with women sold into marriages or sex slavery, but their vibrant delivery and dreamy synthesizers keep things from skewing too bleak. Iggy Pop shows up to lend demonic vocals to the snaking “La Uva,” while John Frusciante pours molten guitar over closer “My Half,” but this is Bender and co.’s show, as she pants and moans like PJ Harvey over the atmospheric proceedings. A Raw Youth is the rare album that inspires with pure energy and solid songcraft, calling to its listeners to stand up for what they believe in.