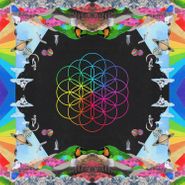 After starting out as creators of post-Britpop rainy day anthems, Coldplay have proven they can do and sound like just about anything. That’s exactly what they do on their eclectic seventh album. Far from the understated Ghost Stories, A Head Full of Dreams brims with life on first single “Adventure of a Lifetime”—its nu-disco strut is the sexiest thing the band has put to tape. For anyone who though Beyonce’s “XO” sounded like a Coldplay song, that’s probably true, since she appears here on “Hymn for the Weekend,” pouring layers of luscious vocals on the hard-hitting piano jam. But even with hip hop and EDM beats throughout the album, it’s still Coldplay, after all. Songs like “Everglow,” which curiously features vocals from Chris Martin’s consciously uncoupled ex-wife, Gwyneth Paltrow, offer Martin’s wearily vulnerable balladry. However, on this song and others, A Head Full of Dreams is uncharacteristically upbeat—even “Everglow” looks on the bright side of remaining friends and a special place for a person with which things didn’t work out. It’s an mature sentiment, and as such, A Head Full of Dreams finds Coldplay embracing their status as the biggest pop band for adults on the planet.