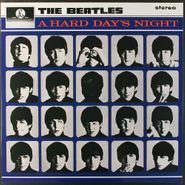 In 1983, my teacher Ms. McKinney gave us questionnaires designed to help us get to know our fourth grade classmates better. One question was "Who’s your favorite musician/band?" My interviewee, Jed Drinkard, replied "Michael Jackson," someone I was still unfamiliar with. Jed described the gloved one and I had no idea whom he was talking about so I illustrated his answer with a red guitar (we were to illustrate the answers). He asked me the same question and I panicked. Looking around, everyone had given the same answer except Lincoln Dickison, who’d said "The Beatles." Not knowing the names of the bluegrass, classical, jazz and soul my parents mostly played at home and afraid of not having an answer, I repeated his. When the school day ended, I jumped off the bus and ran to my mother’s record collection, hoping she’d have some Beatles so I could find if I actually did like them. She did and the first record I played was A Hard Day’s Night, which is still one of two favorites. From the classic, opening chord, I was hooked. Nowadays it seems like most people view the early Beatles almost apologetically but to me, the best stuff is the early, unpretentious, catchy and short numbers that echo and sometimes exceed the best songs by the likes of the Miracles, Everly Brothers, Harlan Howard and Del Shannon.

Starting with the opening chord off George's 12-string guitar it's evident that something new and sonically explosive is on its way. With an entire album of musically modern self-penned songs and the masterful production of George Martin, the Beatles cement their legacy with A Hard Day's Night. It's the sound of a band come of age. The harmonies are richer, the chord changes are more interesting, and the rhythms are hypnotic. Recently developed multi-track recording allowed the band to showcase their creativity and originality. Paul McCartney's melodic craft is on full display in "And I Love Her," "Can't Buy Me Love," and "Things We Said Today," and John Lennon is vocally and lyrically bursting at the seems, writing half the songs. Add George's flawless guitar work and Ringo's rock-steady beats (including awesome cowbell work) and the stage is set. The open-heartedness of "I Should Have Known Better," "I'll Cry Instead," and "If I Fell," the immediacy of "Any Time At All" and "I'm Happy Just To Dance With You," and the strut of "When I Get Home" and "You Can't Do That" make for a defining pop album that leaps from your speakers. 14 love songs that make you forget every other love song. A four-piece band inventing the sound of a four-piece band. A masterpiece. The movie's good too.