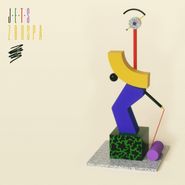 The rallying cry of the kelly green-clad football fans of MetLife Stadium is now the name of a production duo as well. Consisting of the jungle/glitch artist Machinedrum and sex-obsessed Detroit techno producer Jimmy Edgar, J-E-T-S do not sound like any obvious conclusion to this particular pairing. Instead, ZOOSPA delves into mini-abstract worlds of sound, creating an IDM-influenced deconstruction of modern R&B in the process. Featuring a variety of guest singers/rappers, ZOOSPA finds the duo providing alien soundtracks as templates for these artists to work with. Some play it relatively straight, such as KingJet or Dawn Richard, who helps turn “POTIONS” into a malfunctioning Keith Sweat song. Others embrace the weirdness, as on the impossibly jittery “REAL TRUTH,” which features Tkay Maidza doing an eerily uncanny approximation of peak Azealia Banks. Less spastic and willfully-obscure than PC Music, sexier than the robotic pop of Jerry Paper, ZOOSPA is a strange but rewarding collection of alternate universe slow jams and bangers. The aural equivalent of holding a mirror up to a FM radio.