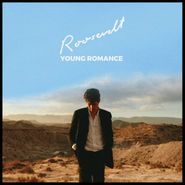 Roosevelt's sophomore release reveals Marius Lauber's sunnier side, leaning more heavily on the pop side of his electronic pop. This is immediately evident in the single, “Under The Sun,” which soars like M83's “Midnight City,” followed by “Shadows” which rides on a retro groove akin to Phoenix; the equally groovy “Forgive” features hazy guest vocals by Washed Out. “Getaway” thumps in like something from the Drive soundtrack but melts into a sweetly blithe vocal.