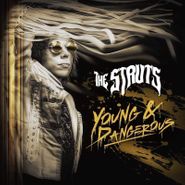 The Struts' new record Young and Dangerous wears its attitude on its sleeve, as the band still shoots for retro glam-rock and punk energy. Their scruffy rock n' roll merges with more straightforward pop this time around, most obviously in the second version of “Body Talks," which features a guest turn from Kesha. “I Do It So Well” mostly eschews the retro sound, but “Who Am I” dives straight into a disco beat. It works surprisingly well for the song, especially with singer Luke Spiller's flexible vocals – also showcased on the ballad “Somebody New.”