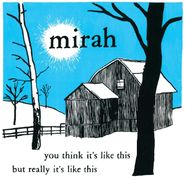 The 20th Anniversary reissue of You Think It's Like This But Really It's Like This, Mirah's seminal breakout album, is remastered and paired with a compilation of covers by long-term collaborators such as Mount Eerie and The Blow, as well as artists influenced by Mirah such as Palehound, Shamir, Half Waif, and more. The reimagined album artwork and exuberance of the music makes this collection as fresh as the original release was in 2000.