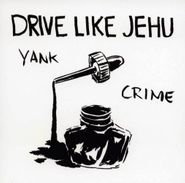 Instrumental in defining the as-then-yet uncoined “hardcore emo” sound, Drive Like Jehu’s 1994 sophomore album Yank Crime has a profound place in musical history. Just as tense and aggressive as anything preceding it in hardcore, the album strained and yearned enough to carve out the evincing new strain (emo) . . . but in all cases, Yank Crime was a nerve-wracking assault on what could be called convention. Rick Froberg’s vocal accusations fly on the album opener, “Here Come the Rome Plows,” which is entirely accessible; but by the second track, “Do You Compute,” Froberg becomes at turns light and sinister, and the tensions therein are what defines the band. The sad part of it all? This was Drive Like Jehu’s final album, which lends a little more mystique to this album’s pioneering spirit.