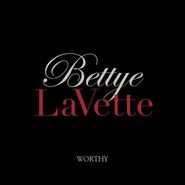 Bettye LaVette’s story is one of tough luck and coming out on top. After scoring a top 10 hit in 1962 “My Man—He’s a Lovin’ Man” at only the age of 16, she had a few more hits, but her career sputtered somewhat. Her debut album didn’t come untill 1982, and then its follow-up, more than 20 years later. But the soul singer’s career’s second life has been fruitful, and the gratefulness and joy LaVette has for her work comes through on the Joe Henry-produced Worthy, which features songs written by Bob Dylan, The Beatles and many others. On Chris Young’s “When I Was a Young Girl,” she seems to reference her own career with the line “yesterday’s illusions may be tomorrow’s smiles” over a hard-blues track. LaVette’s weathered yet strong voice makes Mickey Newberry’s “Bless Us All” a touching and believable prayer for those in the worst of circumstances. Every song feels like a highlight, from the grooving Stones cover “Complicated” to a heartfelt run through the Beatles track “Wait.” We’ll have to say the best tracks are “Where a Life Goes,” with LaVette laughing as she asks an ex, “do you even sleep?” as well as her gritty performance on the title track. The showstopper might be her run through producer Henry’s “Stop,” in which she sounds tortured while describing a cruel relationship—“tell the wind don’t blow, just ’cause you said so,” she sings, her voice wringing the emotions out of every syllable. “Don’t tell me to stop,” she wails, and we hope she never does.