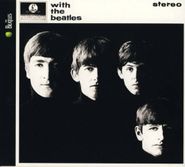 With The Beatles was the first album by a rock group to sell 1 million copies in the UK and was number 1 for 21 weeks (replacing Please Please Me for a total of 51 straight weeks at #1). Why? Because it ROCKS! The excellent covers ("Please Mister Postman," "You Really Got a Hold On Me," "Roll Over Beethoven," and "Money (That's What I Want)") show how funky and soulful the band could be, but the originals re-affirm their songwriting greatness. "All My Loving," "Devil In Her Heart," and "Hold Me Tight" are heartbreaking in their achingly innocent longing compared to the bitter moodiness of "Don't Bother Me" (George's first original) and the cool confident swagger of "All I've Got To Do." "It Won't Be Long" with its shouting call and response "yeah!" refrain and "I Wanna Be Your Man" (covered by the Rolling Stones for their first hit) with its relentless back beat and running rhythm guitar are the rockers of the set. George Harrison shines bright on With The Beatles with an impeccable eight bar solo on almost every song including the amazing acoustic work on "Till There Was You." Recorded only four months after the release of their first album, the songs are meatier and more dynamic in sound with pop, rock, rhythm and blues, soul and even Broadway all thrown into a tasty stew best served LOUD. Oh yeah, also the album cover is the coolest ever.