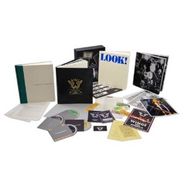 Alan Partridge once described Wings as "only the band the Beatles could have been," and nowhere is this more evident than on Wings Over America, a live document of some sort of bizarre arena-Badfinger/Beatles tribute band. Paul McCartney's gift for melody has never been limited to lilting romantic sentiments, and this is sort of a shockingly riffy album for Macca. It appears that he takes playing guitars very loud very seriously, spending most of the record processing his entire catalog through driving, ripping tones supported by tight propulsive percussion, making "Band On The Run" sound sort of like outtake from Lark's Tongue-era Crimson (I'm serious). This is not a record for the faint of heart: its dizzying conceit of editing different American dates into a single cohesive megaconcert puts us, the listers, in a position neither the band nor the live audience ever had to be in, burrowing us further and further down the M-hole until Denny Laine is appearing as a fractal white rabbit leading us further and further towards one of Thrillington's nightmarish tea parties. HIGHLY HIGHLY RECOMMEND.

Bonus DVD: the 75 minute TV special Wings Over The World and a brand new short film charting the tour route in photographs.

All set within a numbered hardbound slipcase containing: