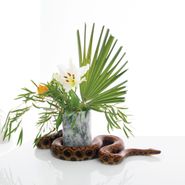 It's exciting to experience the growth of an artist, to see the directions they head in and the new musical frontiers they forge. Noah Gundersen's debut, Ledges, was an intimate indie folk album that seemed to be more closely connected to the world of '70s private press folk than some of his poppier contemporaries. But his new album, White Noise, plays off his folk roots and the result is a rock album that seems too sentimental, sincere, and emotional to be labeled rock. Expanding on simple melodies and powerful lyrical imagery that shows off his songwriter roots, White Noise creates hypnotic songs through bare productions that pull a lot of influence from the reverb heavy vibe of Echo and the Bunnymen with a touch of Eno-style studio experimentation, making this album sound more unconventional and riskier than other overblown rock productions. Songs that would have been simpler and quieter only three years ago are now dense and filled with endless discoveries as electric guitars pump through amps, drums shatter glass, and celestial synths send you into an introspective journey. The opening powerhouse "After All (Everything All The Time)" would've been a hit in the weirdo landscape of '90s rock, but today feels like a type of ballad we're desperately missing today. Using soft harmonics and strange electronic devices, the song slowly builds until it explodes with blissful noise. The hi-hats shatter, the guitars feel like they're being spun around your brain, and Gundersen's tragic voice cries out with such sadness and despair. One listen and you're bound to feel something. White Noise doesn't only fulfill the desire and placement of rock music in popular culture with catchy songs and memorable lyrics, but is a fresh reminder that there's still a lot of life and vitality in rock music today. This album is something special.