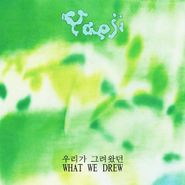 Inspired by both Korean indie rock and electronica that she listened to as a teenager in Seoul, as well as late '90s and early 2000s hip-hop and R&B, Brooklyn-based Korean American producer Yaeji’s self-produced debut is full of lush beat-filled electro that speaks of the loneliness and mental turmoil behind the good-times usually associated with this genre. Guests featured include Brooklyn-via-Oakland rapper Nappy Nina, London performance artist Victoria Sin, London producer Shy One, Tokyo DJ and producer YonYon, and others.