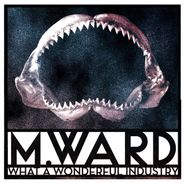 M. Ward both toasts and throws some shade at the music industry on his latest album, a surprise release that is tellingly-titled. If one could take the conflicted and ironic essence of Nick Lowe’s “I Love My Label” and disseminate that feeling into an entire album, well, What A Wonderful Industry wouldn’t be too far off. The sounds are easygoing for the most part, full of Ward’s telltale acoustic strum and gentle coo of a voice, but the characters that populate these songs are described as ranging from “a lot of very inspirational people I've had the pleasure to work with but…also a few I wish I'd never met.” Catharsis feels too strong a word for an album that is so often mellow and warm, but Ward provides compelling melodies to score the unsexy, unsavory, and bureaucratic world behind the music.